I dug up this old children's tape recorder to add a little spice to our reading groups.  Each child had a turn to read and record a page of this week's story.  After the story was read, I played back the recording so the children could have a chance to listen and critique their reading.  This kept the children engaged and focused.  It was such a success as a reading tool!  I can't believe I haven't thought to use it before this...it's just been sitting in my classroom collecting dust!
Posted by Karen LeBlanc at 3:32 PM No comments:

The focus letter was Ww.  The children found six!  I asked them to draw six things and write about them.  This child drew groups of six and wrote a little something about each group.

This was a class favorite!  The poem is to the tune, Did You Ever See a Lassie?  The kids loved singing about UNDERWEAR!  The focus letter was Uu.  I asked the students to make subtraction sentences using seven cubes.

A follow-up to one of our St. Patrick's Day songs, but instead of the leprechaun giving a pot of gold the children could substitute something else.

The children had to find letter Xx.  There were only two, so I asked the children to write by 2's beginning at 50.  They were so excited to write past 100!

The children had lots of fun designing their rainbow hair and writing about it. We used the document camera to share our pictures and writings.  This really motivated the students to do their best.


Note:  The poems featuring a letter focus were from
Kim Jordano's website.
Posted by Karen LeBlanc at 2:46 PM 2 comments:

NOTES TO OUR FROGGY FRIENDS

The students have been writing valentines to each other since Valentine's Day as mentioned in my February post.  A few weeks ago we started writing notes to each other.  One of the students wanted to know if we could write back to the person who sent them a note.  What a "frog"tastic idea!  So each Tuesday the children write to a friend and on Thursday we write back.  Their thoughts are sweet and meaningful.  I just love this activity - it promotes kindness and concern for each other.  After a few more weeks of this...we write letters!

I added the double check idea at the bottom of our note paper.  This great idea came from Mrs. I's Class!
NOTE WRITING PAPER
Posted by Karen LeBlanc at 10:45 AM No comments:

Here's a song from Dr. Jean that helped the children learn about the rain cycle.  The children absolutely love this song!
The Water Cycle
Tune:  My Darlin' Clementine
Evaporation
Condensation
Precipitation all around
Accumulation
Evaporation
The water cycle goes
Round and round.

Here's a pocket chart I made from Thematic Units for Kindergarten by Kristin Schlosser, a book I've had for years.  It's to the tune of Bingo.

This is the water cycle experiment that will be set up in the Science Center.  The cloud is made from a coffee filter.

We will observe the water in this glass container and check the level each week to see how much water has evaporated.  We will mark the water line until the end of the school year.


The children enjoyed several stories about clouds.  They know the difference between cumulus, cirrus, stratus, and cumulonimbus clouds.  Here are some of the children's cloud creations.

Of course, after the rain comes a rainbow!   The children reviewed colors by working on fruit loops math.

FRUIT LOOPS SORT_ TALLY_ GRAPH_ AND ADD
Posted by Karen LeBlanc at 1:04 AM No comments:

The GBM went to Ireland!  He sent us Irish music and books about St. Patrick's Day.

Each student brought in a potato to discover.   Below the basket of potatoes is the letter from the GBM.

The children made the flag of Ireland and stamped their passports.

The children wrote about Ireland in their travel journals.


Below are pictures of the My Potato book each child filled out on their potato brought from home.

We are trying to sprout three different types of potatoes!

Posted by Karen LeBlanc at 11:27 PM No comments:

The children picked a number card and divided gold (cereal) between the leprechauns to see if they would get fair shares.  The children had to write the amount each leprechaun received using the appropriate symbol to show if the numbers were equal, greater than, or less than.  Of course, it's always great to eat the manipulatives.
LEPRCHAUN'S GOLD FAIR SHARES

We made these adorable leprechaun baskets hoping to catch a leprechaun.  See the leprechaun ladder hanging?  That was for the leprechaun to climb, which he did and lost his shoe!  Do you see it hanging up there?

No luck catching him, but he did leave a note and gave us some treats.  We saw all the gold dust he left around the room,too.

The children made leprechaun hats to celebrate St. Patty's Day.

RAINBOWS
After reading about colors and rainbows the children cut a cloud shape and measured streamers to make a rainbow.  Then the children wrote about  what they would find in the pot at the end of the rainbow.

Here are our adorable leprechauns made from following the glyph directions.  I like the way each one has its own personality - some are sitting, kicking their legs or waving their arms.
Reading Our Leprechaun Glyph

This is a fun and challenging activity for the kindergarten kids.  It's fun to hear the excitement and discussions going on as the students make words.  This activity gives the children practice in making words using word families, popcorn words, and sounds from our sound chart.
LEPRECHAUNS - MAKING WORDS


SHAMROCK MEASURING
The children measured a shamrock's width using non-standard units of measurement and then used a ruler to measure in inches.
Note: This is not my creation.  I found this wonderful activity in my files.
49131249-Shamrock-Measurement


IF I FOUND A LEPRECHAUN'S POT OF GOLD...

If I Found a Leprechaun's Pot Of Gold Writing Prompt


RAINBOW SOUNDS
The students picked three small objects and listened for the beginning and ending sounds in the word.  Some of the students knew how to spell the word, but I reminded them it was a listening activity and not a spelling activity.

We made these cute Cat in the Hats. Each child had to complete the rhyme.  We had so much fun with this song all week.  The song came from Making Learning Fun.

The class did a directional drawing of Thing One or Two and then painted the Things with watercolors.  Another idea from Making Learning Fun.

Of course we had to read Green Eggs and Ham.  Then we graphed who liked green eggs and ham.  Each child made an individual serving in the microwave using a recipe from Making Learning Fun.

Here's some writing responses from
I Wish That I Had Duck Feet.
Duck Feet Writing

This is the morning message for Wacky Wednesday.  The children had to find all the wacky things.

This is a picture of some students partner reading.  This gives the students a chance to practice reading, being a good listener, and being a helper to each other - not a teller.

Here are some children at the Dr. Seuss Read-A-Thon!  Each child received a bookmark and a Cat in the Hat log to record their books.  We talked about practicing our STAMINA!

The children were inspired to create their own versions of wockets in their pockets after reading the book.  Each child had to use a blend or diagraph to rhyme with pocket for their creations.  I think they are adorable!

We made this delicious Cat in the Hat snack to end our SEUSS-sational week!!!
Posted by Karen LeBlanc at 11:17 PM No comments:

Hop On Over To My Store

HOP ON IN FROGGY FRIENDS!

Welcome to our classroom blog. Hope you enjoy viewing all of the "frog"tastic learning taking place at Mrs. LeBlanc's Pad. Hop on by often as we are always busy having fun at the pond.

Karen LeBlanc
My career has been enriched by the opportunity to start two successful Pre-K programs and owning and operating an early learning school for eleven years. Currently, I have left the classroom to have more time to create resources that will inspire enthusiasm for learning in a fun way for both the teacher and the student. 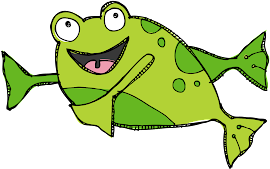